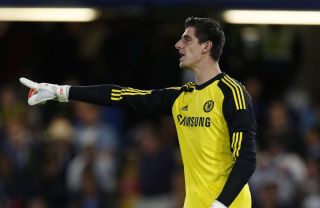 The battle between Courtois and Cech to become Mourinho's established first choice in goal has dominated many pre-season headlines out of Stamford Bridge.

And the Belgium shot-stopper looks to have usurped Chelsea's Premier League and UEFA Champions League-winning keeper after being named in Monday's XI to take on the newly promoted Lancastrians at Turf Moor.

The decision immediately throws Cech's Chelsea future into doubt, with Mourinho admitting pre-match that the man not selected would likely look elsewhere for a first-team spot.

After spending three years on loan at Atletico Madrid and contributing to last season's historic Liga title win, Courtois finally makes his competitive debut for Chelsea, and seemingly ushers in a new era in goal for the club.

Cech was signed by Chelsea in 2004 and immediately shunted Carlo Cudicini out of the first-team picture - Mourinho's decision to replace the established number one has been curiously mirrored a decade later.

However, his greatest hour came in the 2012 Champions League final against Bayern Munich in the Germans' Allianz Arena home.