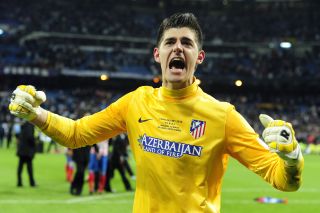 Belgium international Courtois is on loan at Estadio Vicente Calderon from Premier League side Chelsea.

The 21-year-old has spent the previous two seasons with Atletico following his move from to Chelsea from Genk in 2011.

Courtois has great affection for Atletico, but admitted he is unaware as to where his future lies.

"We must wait, time will tell," he told Sportium.

"This year I wanted to stay because I wasn't sure if I would play at Chelsea.

"Besides, I was excited to play in the Champions League with Atletico and wanted to be a starter with a view towards the World Cup.

"But now everything depends on Chelsea. I had a conversation with (Jose) Mourinho and decided it was best to stay here.

"I belong to Chelsea, but Atletico is the most important club of my life. I've got titles and prestige in a short time."

Atletico sit second in La Liga following a superb start to the season, but Courtois knows that Diego Simeone's side have a long way to go if they are to be in the running for the title.

"We are working very hard for the team to maintain this level all season, but the road is very long," he added.

"We want to get as far as possible and we are showing that we have the team for it.

"It has improved a lot since he (Simeone) arrived.

"He is one of the best in the world, he's well motivated and gets the best out of everyone. He has instilled his winning mentality."