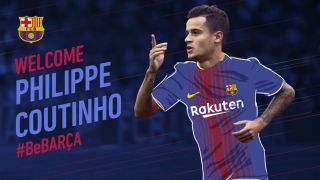 Barcelona have confirmed a deal is in place for the big-money signing of Philippe Coutinho from Liverpool, the Brazil international set to move for a reported fee of £142million.

Coutinho, who joined Liverpool from Inter in January 2013, was the subject of significant interest from Barca in the previous transfer window, but a switch to Camp Nou failed to materialise as Liverpool rejected multiple bids and the playmaker's transfer request.

The leaders of LaLiga will now get their man, with the enormous fee set to make him the most expensive player in the history of Spanish football. It will also be the highest amount ever received by an English club.

Coutinho has agreed a five-and-a-half-year deal and will add further attacking threat to a side already boasting the likes of Lionel Messi, Luis Suarez and Ousmane Dembele.

In a statement, Barca revealed their new signing will have a buyout clause of €400m, with details of his arrival and presentation still to be announced. Liverpool also confirmed a transfer agreement had been reached, subject to a medical and personal terms being finalised.

Coutinho's departure from Anfield, which comes two and a half years after Suarez made the same switch to Barca, undoubtedly represents a significant blow to Liverpool boss Jurgen Klopp.

In 152 Premier League appearances for the Reds, the 25-year-old contributed 41 goals and 35 assists, while he has found the net on 12 occasions in 20 appearances in all competitions this season.

Coutinho missed Friday's FA Cup win over rivals Everton through injury and leaves with the Reds sitting fourth in the Premier League.

Dembele arrived from Borussia Dortmund in August as Barca made their first big move in attempting to replace Neymar, who joined Paris Saint-Germain in a world-record €222m deal.