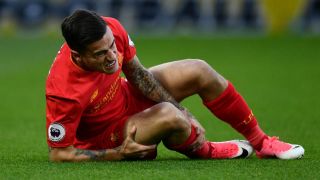 Philippe Coutinho was forced off in the first half of Liverpool's Premier League contest at Watford after being injured in a seemingly innocuous clash with Adrian Mariappa.

The Brazil international was involved in a clash of legs with the Hornets defender and received treatment on the pitch.

Coutinho attempted to continue, but was clearly in discomfort and could be seen hobbling when not on the ball. After coming off, he had strapping placed around his thigh.

While the loss of Coutinho, who spent time on the sidelines with an ankle injury earlier this season, represents a blow to the Reds, boss Jurgen Klopp was able to welcome back Adam Lallana as his replacement – the England international having not played for Liverpool since March 19 after injuring his thigh for the national team against Germany.

Watford were soon forced into a reshuffle of their own when Miguel Britos hobbled off to be replaced by Christian Kabasele.