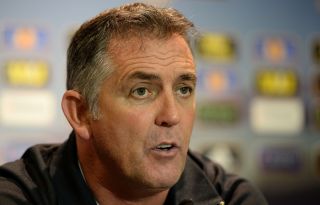 Wigan have the chance to leapfrog their Russian opponents at the top of Group D on Thursday, having picked up a goalless draw against Zulte Waregem of Belgium and a 2-0 home victory over Slovenia's Maribor in their opening two fixtures.

And Coyle knows his side will have to be at the top of their game for the visit of Kurban Berdyev's men.

"Both performances in Zulte Waregem in Belgium and the home game against Maribor have been terrific in different ways," he said.

"Tomorrow night will need to be of the same standing. Rubin Kazan are a fantastic side - favourites for the group - but we have an opportunity to go above them and if we play to our level, we certainly believe we can win the game.

"But we're under no illusions how difficult it will be. They're a quality side - a side that narrowly lost out in the last eight last year versus Chelsea 5-4 on aggregate.

"They've a tremendous European pedigree, as well as domestically, and it's an exciting time for everyone at Wigan Athletic."

Coyle believes there is a determination within his squad to qualify for the knockout stages and he has been encouraged by the way the campaign has started.

"We want to progress, we want to qualify from the group, and to do that we'll have to give two big performances both home and away against Rubin Kazan," he added.

"Given the way the group has started, I don't think I'd be too far away in suggesting that, if we were able to win our game tomorrow night, it would put us in an outstanding position."