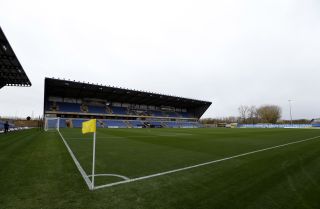 Crewe’s League One game at Oxford was postponed just over 30 minutes before the scheduled 3pm kick-off after a player tested positive for coronavirus.

The Crewe player in question has not been named.

The news was first announced in a statement on Oxford’s Twitter feed, which read: “Today’s game has been postponed due to a positive Covid-19 test within the Crewe Alexandra squad received this morning.

“After consultations with Crewe, the match officials, the EFL & other relevant authorities, the game has been postponed.”

Today’s game has been postponed due to a positive Covid-19 test received within the Crewe Alexandra squad received this morning.— Oxford United FC (@OUFCOfficial) October 3, 2020

A Crewe statement added: “We are unable to fulfil today’s fixture against Oxford United due to one of our players being notified this morning that he is Covid-19 positive.”

The EFL announced the match will be rescheduled for a date to be confirmed.

A statement from the league read: “Each case is judged on its individual merits and due to the circumstances, the club (Crewe) has advised the EFL it is unable to fulfil the fixture as players and first-team staff are now required to self-isolate in line with EFL and Government guidance.

“A revised date for the rearranged fixture will be confirmed in due course.”