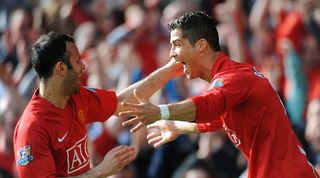 Cristiano Ronaldo says he was influenced by Ryan Giggs, Paul Scholes, Ruud van Nistelrooy and Rio Ferdinand during his time at Manchester United.

Ronaldo scored 118 goals in 292 appearances for the Red Devils, with whom he won three Premier League titles, a Champions League, an FA Cup and two League Cups during a six-year spell.

The Portugal international arrived at Old Trafford as a flashy 18-year-old winger in 2003, and departed in 2009 as a prolific goalscorer and the world’s most expensive footballer.

Asked how he transformed his game in Manchester, Ronaldo picked out four players whose examples he followed.

“By using my brain,” the Juventus striker told France Football. “If you’ve got a little intelligence, you look and take example from those who are doing things better than you.

“That’s what I did when I was in Manchester with Ryan Giggs, Paul Scholes, Ruud van Nistelrooy, Rio Ferdinand… if you don’t learn from guys like that, you’re an imbecile.

“The goal isn’t to imitate but to take aspects from those who are the best and adapt it to your own personality. That’s what I did. I had some talent and I watched them.

“Sir Alex Ferguson also taught me a lot, and I realised I had the potential to score, not only dribble and pass. I started to think of being a complete player without any weakness. I could score with my right foot, my left foot and my head. I’m strong and I’m quick.

“If you have this and a real ethic and a good lifestyle, you can still do it at 34-and-a-half years old.”

Having already won the Champions League with United and Real Madrid, Ronaldo is currently looking to become the second player after Clarence Seedorf to lift the trophy with three different clubs.