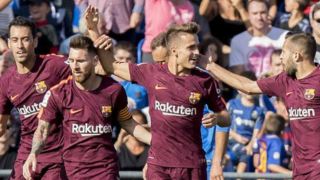 Denis Suarez believes Barcelona's critics were wrong to doubt the squad's quality after they continued their perfect start to the new LaLiga season with a dramatic 2-1 win at Getafe.

A miserable first half on Saturday saw Barca lose Ousmane Dembele to injury on his full LaLiga debut and fall behind courtesy of Gaku Shibasaki's spectacular strike for the hosts.

But two substitutes, Suarez and Paulinho, both struck after the break as Ernesto Valverde's men continued to set the pace at the top of the table.

Barca were doubted by many after losing Neymar to Paris Saint-Germain and suffering a heavy Supercopa de Espana defeat to rivals Real Madrid, but Suarez feels they were written off too soon, with a Champions League win over Juventus also on their 2017-18 resume.

"It seemed as if everything was lost, but we knew how to react," Suarez told reporters after the match, having netted his first goal since January.

"We are having a spectacular start to LaLiga. I think we have a great squad, even though there were lots of comments made at the beginning of the season, people should not doubt that.

"As players we need confidence and the manager is giving us that - you can tell."

2 - Getafe are the only in La Liga side Denis Suárez has scored against in two different games (for Villarreal and Barcelona). Favourite. September 16, 2017

Barca's fine start to the season means they already sit seven points clear of reigning champions Real Madrid, whose game in hand is a testing away trip to in-form Real Sociedad on Sunday.

Their display against Getafe was not a vintage one, but Suarez, 23, suggested the pitch had not helped them.

"Before the game started we saw that the grass was long and dry," said the midfielder, who replaced Andres Iniesta at half time.

"In the move for my goal, the ball moved slowly, but I was able to put it where I wanted.

"It was a fair win, even though they had their chances too."