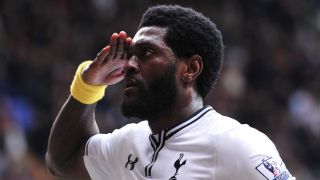 Crystal Palace manager Alan Pardew is unsure whether new striker Emmanuel Adebayor will start against Stoke City on Saturday, but says his new signing has already lifted the mood at Selhurst Park.

The former Arsenal, Manchester City, Real Madrid and Tottenham striker agreed a deal with Palace for the remainder of the season this week, having left Spurs by mutual consent in September.

The 31-year-old has not played a competitive match since scoring for Togo against Liberia in June, having fallen out favour at White Hart Lane, and questions over his attitude have partly contributed to Adebayor's highly incentivised, short-term deal.

Pardew has fitness concerns over Yannick Bolasie (knock), Dwight Gayle and Bakary Sako (both hamstring), while a decision on Adebayor's role will be made in the coming days.

"Our initial look at him has been good, so we're buoyed by that," Pardew told reporters on Thursday.

"He looks good in training, fit and well, he's focused on doing a good job for Crystal Palace and we've incentivised his contract to do that in terms of him being a success here.

"I see in him a desire to get his career back on track and I think I can help him. I hope it's a win-win situation. You can't underestimate the quality he has.

"I've tried to sign him twice before, once at West Ham and once at Newcastle, so he's a player that's been on our radar for a while.

"He's a character that needs to be loved and I think with the group, the staff and the fans we have, he's going to get that."

Stoke go into Saturday's fourth-round clash following League Cup semi-final heartbreak against Liverpool on Tuesday, when they were beaten on penalties at Anfield.

Mark Hughes' men edged past League One Doncaster Rovers in their FA Cup opener at the start of the month, but will be without Charlie Adam (calf) and Geoff Cameron (ankle) this weekend.

Ryan Shawcross could play a part after a back problem, while Stephen Ireland is set to feature as Hughes seeks to end a four-match winless run against Palace.

"I think that recent experience of going up against Crystal Palace will come into our thinking," he said.

"It'll be a good test and a good challenge for us. They're a team that are looking to achieve things in a similar way that we are and it'll be a good match-up.

"Adebayor has been a great player. I enjoyed working with him when I had him at Manchester City and it's a good acquisition for them. When he came into [City] he was like a house on fire and did well.

"He later had a few problems with the FA but I was sacked by then so it didn't really affect me!"