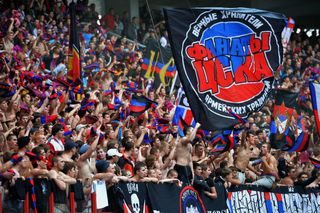 Toure was said to have been targeted by a section of CSKA supporters during City's 2-1 win in their UEFA Champions League meeting at the Arena Khimki on Wednesday.

The English club are expected to make an official complaint to UEFA, who will wait for the referee's report before deciding whether to launch an investigation into the matter.

But CSKA have been quick to refute allegations of racism, and insist their fans did not single out Toure for abuse.

A statement on the club's official website read: "We are surprised and disappointed by statements made by Manchester City player Yaya Toure alleging racially motivated insults from fans of CSKA.

"Having carefully studied the video of the game, we found no racist insults from fans of CSKA. In many occasions, especially during attacks on our goal, fans booed and whistled to put pressure on rival players, but regardless of their race.

"In particular, this happened with Alvaro Negredo and Edin Dzeko. Why the Ivorian midfielder took it as all being directed at him is not clear.

"It is an important fact that during the entire history of European competition our club has never observed, or been punished for, acts of racism from fans.

"In any case, we deplore this incident, although we believe accusations of racism are unfounded."