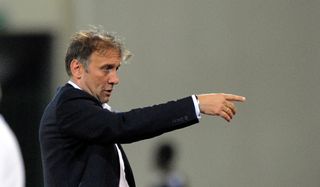 Jiangsu Sainty and Qingdao Jonoon sit two points clear of 15th-placed Changchun Yatai and will be aiming to do enough in their respective fixtures to ensure safety.

Sainty welcome Shanghai SIPG to Nanjing Olympic Sports Centre with their sights set on revenge after losing the reverse fixture 2-1.

However, manager Dragomir Okuka will face a dilemma over his tactical approach to the fixture, with the hosts only needing a draw to keep their place in the division.

Qingdao, meanwhile, need an away win over third-placed Beijing Guoan to make absolutely sure of safety, owing to their inferior goal difference compared with Changchun.

Unfortunately for Qingdao, their last visit to the Workers' Stadium ended in a 5-2 defeat in the FA Cup quarter-finals in August - another loss on Sunday would leave the fate of Goran Stevanovic's men in the hands of Changchun, who face Liaoning Whowin at home.

Despite currently occupying a spot in the drop zone, Changchun's recent form compares favourably with that of their relegation rivals. Svetozar Sapuric's charges have won three of their last five fixtures and will take comfort from the fact they took three points from the reverse fixture in June.

And in the remaining fixtures, Shanghai Shenhua travel to Guangzhou R&F, Dalian Aerbin go in search of their first win in four as they host Hangzhou at the Jinzhou Stadium, and Shanghai Shenxin aim for a potential climb to fifth with victory over Tianjin Teda.