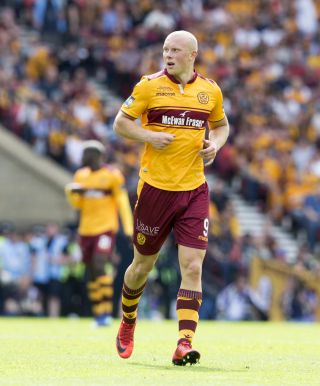 Curtis Main admitted the lure of European football was a major factor after leaving Motherwell for Aberdeen.

The English frontman was out of contract at Fir Park and is looking forward to tasting Europa League action with the Dons.

Main told RedTV: “I’m excited by the challenge and by the different aspect of playing for Aberdeen.

“Obviously European football is a big draw and it’s a big club, one that I am excited to join. So now I am here I am looking forward to getting started.

“I’ve enjoyed playing in the league and I’m pleased to move on to such a good club like Aberdeen. I just hope I can bring success to the club.”

The 26-year-old spent 18 months with the Steelmen and helped fire Stephen Robinson’s team to the 2018 William Hill Scottish Cup final.

Main’s first campaign in Lanarkshire ended with him contributing eight goals from 21 appearances in claret and amber, but his second campaign was not so fruitful as he found the net just six times in 37 outings.

Before joining Well, Main had spent three years at Middlesbrough where he played alongside current Dons coach Barry Robson.