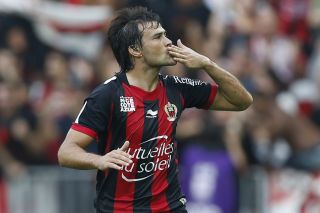 The Argentinian performed superbly in his debut season for Claude Puel's men, netting 22 goals in all competitions following his move from Ajax.

Cvitanich's prolific form led to speculation he could leave the French club in the last transfet window, with Roma among the clubs reported to be interested in signing him.

The 29-year-old frontman was flattered by the reported interested in him, but stressed that he is happy at the Cote d'Azur club.

"It's important for me that clubs like AS Roma show an interest," he told BeIN Sport.

"But today I'm a Nice player. If other clubs are talking about me, it's because Nice have given me the chance to shine."

Cvitanich admitted that the rumours had affected him in the early part of the season, but he has put that behind him to score five goals.

"It's true, the transfer window was a complicated period for me," he added.

"When you're only thinking about football, it's easier."