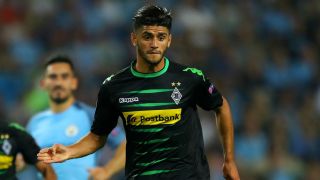 Mahmoud Dahoud has agreed a deal to join Borussia Dortmund at the end of the season for an undisclosed fee.

The Germany youth international has signed a contract that will keep him at Signal Iduna Park until June 2022.

"Mo Dahoud is a hugely talented and exciting player for central midfield and one we have been watching intensively for several years," Dortmund sporting director Michael Zorc told the club's official website.

"He has already shown he can play at the top level."

BREAKING: Mahmoud will complete a move to this summer. More details: March 30, 2017

The highly rated 21-year-old midfielder, who can also play in a forward role, has reportedly been the subject of a transfer tug-of-war between Dortmund and Liverpool in recent days.

A report in Germany claimed that Jurgen Klopp sanctioned an offer of €25million in an effort to secure Dahoud's signature, but a meeting with Dortmund boss Thomas Tuchel convinced the player not to move to the Premier League.

Gladbach sporting director Max Eberl said of the deal: "It was important for the player and the club that a decision was reached. Now it's off our minds and we can move on.

"We will reinvest the money we get for Dahoud and try to find a good replacement for him."

Dahoud has made 32 appearances in all competitions this season, including four in the Champions League group stage.