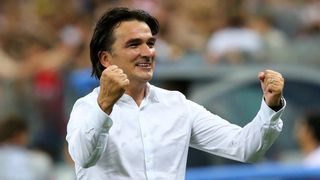 Croatia head coach Zlatko Dalic insists his players will tell him if they are not fit enough to take part in Sunday's World Cup final against France.

All three of Croatia's knockout matches have gone to extra-time, Dalic's men triumphing on penalties against Denmark and hosts Russia before edging past England 2-1 in the semi-final.

That has raised concerns over the fitness of some of Croatia's players for the showdown in Moscow, but Dalic has no such worries and is adamant he has built the kind of team ethic that will prevent players taking to the field when not fully fit.

"It's the World Cup final, the players know what that is," he told a news conference.

"One thing that makes me happy is all my players tell me whether they are not 100 per cent fit.

"We've created such a relationship that they will admit 'I'm not fit, I'll miss the final'.

"They know what is at stake but if they are unable to give their all, they will tell us, I expect them to do so.

"We did not insist on training sessions, we have nothing to practice. We need rest, relaxation, we have some minor problems and I hope we'll overcome those today [Saturday] and all my players will be ready to play.

"If not, we have great players on the bench raring to go. I'm not worried."

Midfielders Luka Modric and Ivan Rakitic have been the star turns for Croatia during Russia 2018, but Dalic was keen to highlight the unheralded contribution of striker Mario Mandzukic, who scored the winning goal against England on Wednesday.

"He's a top, top player, his career has shown that with all the clubs and trophies," Dalic added.

"He gives everything he has. When we finished our United States tour, I told him, 'Mario, you'll be a centre-forward', even though he had a different position at Juventus.

"He gives his all wherever he plays, he is the very important link in our chain and he does important work.

"He scored a key goal in the last match and any coach at any club must have a player like that in the squad. I'm very happy he plays for us and more importantly he's enjoying himself and giving his all for Croatia. I hope he continues in the same vein."