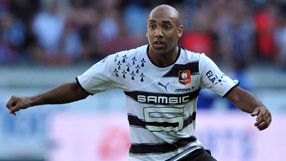 Stade Rennes midfielder Stephane Dalmat has been released from hospital and is fine, the club said in a statement, after he was admitted with an undiagnosed illness following Thursday's Europa League draw with Atletico Madrid.

He could still be doubtful for Sunday's trip to champions Lille.

While Rennes were half pleased with their European result, Paris Saint-Germain are reeling from a 2-0 defeat at Athletic Bilbao ahead of their game at home to fellow co-leaders Olympique Lyon on Sunday.

"[Athletic] is the end of a good run but it is only one match. We have to respond on Sunday against Lyon," he told reporters.

Defender Cris is back in training for Lyon along with striker Lisandro Lopez but their fairly lengthy lay-offs make it unlikely they will return against PSG.

Continually faltering Girondins Bordeaux host Montpellier on Saturday with supporter unrest growing after a Facebook campaign was launched urging fans to boycott club products and the November 5 match against PSG.

Sochaux, who face high-flying Toulouse on Saturday, are desperate to recover from a 4-1 defeat at Auxerre and a 6-2 home hammering by Stade Rennes.

"They are neither two small accidents without consequence nor a very worrying major incident," club president Alexandre Lacombe told reporters.