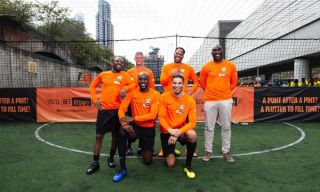 David James sees education and awareness as the keys to tackling problem gambling but is not overly concerned by football’s close links with the betting industry.

The former goalkeeper was speaking after joining a team of fellow ex-England internationals for the final of the Bet Regret Cup, an initiative run by the charity GambleAware and part of the UK’s largest safer gambling campaign.

Teams from across the UK have been battling it out throughout the summer, culminating at the national final at Powerleague Shoreditch on Sunday and a chance to take on the former pros.

Getting my touch back ahead of the #BetRegret Cup on 4th August. Fancy taking on a team of ex-England internationals? The regionals are under way so get your team signed up now https://t.co/ALvyFX67lWpic.twitter.com/rzZeKk5pou— David James (@jamosfoundation) July 10, 2019

Significant concerns have been raised about the ubiquity of gambling sponsors on the shirts of professional clubs and the number of betting adverts shown before, during and after live games on TV.

James told PA: “You only need to watch any live game, or any live sport, especially on the satellite channels and the gambling companies are advertising 30 seconds before kick-off, every half-time.

“They’re doing it for a reason. It is business, it’s legal, so there’s no question about that but for the people who indulge in a bit of gambling then it’s more about the importance of understanding when to stop.

“That moment when you think ‘I shouldn’t have done that’, that sinking feeling, you don’t want people to get to that stage.

“We talk about boredom, being drunk and chasing losses. I think the drinking one is always relevant because a lot of lads will go down their local pubs and clubs to watch games of football and it’s so easy to get drawn into doing that regrettable bet. It’s a message that needs to be out there.

“Supermarkets advertise things on television every day but it doesn’t mean you have to go out and buy them, there is a responsibility of the individual to make the decision whether or not they have a bet.

“If the adverts are good, it does look attractive, but it’s not about whether you bet or not, it’s about controlling yourself, thinking twice.”

Excited to be part of the #BetRegret Cup! Looking forward to teaming up with @konch3 , @jamosfoundation , @CarltonCole1 and @swp29 . Come and see us this Sunday in action at @PowerleagueUK Shoreditch— Joleon Lescott (@JoleonLescott) July 29, 2019

“I’ve got friends that have been unfortunate to be on the end of it,” he said. “It doesn’t just affect them, it affects everyone involved.

“There’s a lot of people that enjoy it and do it responsibly, so I wouldn’t want to take it away from them. But there are measures that need to be put in to prevent the less fortunate ones doing it when they probably shouldn’t.

“There’s always more everybody could be doing but I think we’re going in the right direction, like other issues as well.”

* David James and Joleon Lescott were speaking at the finals of the #BetRegret Cup, part of the nation’s largest safer gambling campaign, Bet Regret. For more info, visit https://www.begambleaware.org/betregret/