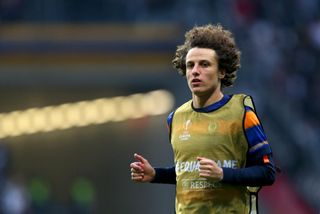 David Luiz is still talking to Chelsea about a new Stamford Bridge contract, according to Maurizio Sarri.

Brazil defender Luiz’s contract expires at the end of the season, with boss Sarri admitting the club have held new discussions with the 32-year-old about an extension.

“I don’t know on David Luiz, I know that he had a meeting four or five days ago, but then my mind was on this match,” said Sarri.

.@_Pedro17_'s away goal is the reward for an excellent Chelsea performance in this first leg.— Chelsea FC (@ChelseaFC) May 2, 2019

Luka Jovic headed Eintracht into an early lead, though Chelsea grew into proceedings with Pedro levelling on the stroke of half-time.

The Blues were left to rue a clutch of missed chances though, with Sarri admitting he felt his men should have won.

“I think that we made a mistake in the first 20 minutes because my feeling was, from the bench, that we were playing only to manage the result for the nil-nil,” said Sarri.

“But we are not able to do that. Then we started to play after 25 minutes and played very well until the 85th minute and deserved to win for the number of opportunities.

“We were in control of the match for 70 minutes and should have won.

“But they are dangerous on the counter-attack if you give them spaces.

Sarri emphasises that Eintracht Frankfurt are also dangerous on the break away from home, as they were today at home. #FRACHE— Chelsea FC (@ChelseaFC) May 2, 2019

“I’ve seen Eintracht’s games in the Europa League, and they are dangerous.

“We want to go to the final, but we know very well we’ll have to play a very good match next week.”

The battle continues next Thursday at the Bridge! Come on Blues! 💪💙 #UELpic.twitter.com/nrP8goONZ3— César Azpilicueta (@CesarAzpi) May 2, 2019

Eintracht boss Adi Hutter insisted his side can complete the job at Stamford Bridge in next week’s second leg.

“Everything is still possible,” said Hutter.

“We have to score a goal, that’s a fact, and Chelsea at Stamford Bridge will be the great favourites – that’s for sure.

“But after the goalless draw here against Inter, no one thought we could go to Milan and win.

“That’s how we have to act in London: be confident, brave and courageous. But I’m happy with the performance. Anything is possible.”