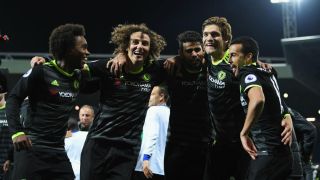 Michy Batshuayi came off the bench to net the decisive goal in the 82nd minute, allowing the Blues to celebrate securing the crown for the fifth time.

It was a new experience for David Luiz, however, after the Brazilian left Chelsea in 2014 for Paris Saint-Germain, before returning to Stamford Bridge at the start of this season.

Under Antonio Conte, he has excelled at the heart of Chelsea's three-man defence, and revelled in the victory at The Hawthorns.

"I am happy. Very happy. It is my first Premier League title. When I decided to come back here I dreamed to win the Premier League. I am very happy because my dream came true," he told BBC Radio 5 Live.

"Tonight was a great game but we did it. We work hard every day to have these moments.

"He [Conte] likes to work, works with passion every day, I am happy for him. He deserves it because he is working hard every day. I need [to go] bed and to sleep."

Eden Hazard, meanwhile, pointed to Chelsea's 13-match winning run over the final three months of 2016 - embarked upon immediately after Conte switched to 3-4-3 - as the time he and his team-mates knew the title was on.

"It's amazing to celebrate with the fans. The game was so difficult. We are very happy," he told Sky Sports.

"We talked a lot about the manager already, he is fantastic and we work a lot in training. Full credit to him and the players. We lost to Arsenal and then we went on an unbelievable run.

"That's when we said that we can win the league."