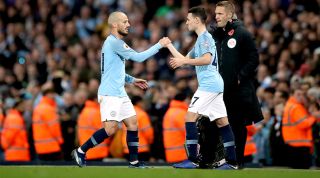 David Silva may have called time on his Manchester City career, but he doesn't seem worried about how the club will fare in his absence and has tipped Phil Foden as the ideal candidate to fill his shoes.

Speaking to the Manchester Evening News, Silva was full of praise for Foden, saying: "I’m sure he’s going to be a fantastic player. He’s a very nice man and he will be a good replacement for me.

“Apart from his natural skills, he’s a very competitive person. He always wants to win and that makes a very good footballer. When you’re young, you always ask people with experience.

"I’ve given him lots of advice, like how to move on the pitch. He’s taken the information in and he’s getting better day by day.

“He reminds me of myself when I was young — especially how he is as a person. He’s very quiet, but always there, competing. He hates losing.

"The best advice I can give him is always stay calm. Whatever happens in football, the highs and lows, always keep calm.”

There has been some criticism of Manchester City in the past for their struggles bringing through young players – opting to break their transfer record to sign Riyad Mahrez, for example, instead of backing Jadon Sancho earlier on.

However, Pep Guardiola has been more willing to give Foden a chance in the first team. The youngster made 13 league appearances last season, scoring one goal, and judging by the incredible solo effort he netted for England's U21s against France recently, it seems as if the faith being shown in him is paying off.

REVEALED! Which Premier League teams have the easiest – and hardest – starts to the 2019/20 season?