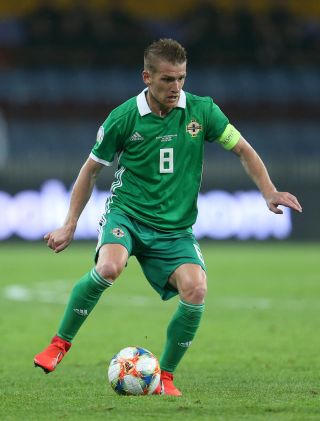 Northern Ireland captain Steven Davis believes the pressure is on Germany and Holland as the Euro 2020 qualifying campaign moves into its decisive stage.

Michael O’Neill’s side have given themselves the best chance possible of beating one of the two heavyweights to a place at next year’s finals by winning their first four games in Group C, home and away to Belarus and Estonia.

Now as they prepare for Monday’s showdown with Germany at Windsor Park, Davis said the weight of expectation was on their opponents.

.@NorthernIreland are out to train at Windsor Park on the eve of their crunch Euro 2020 qualifier against Germany pic.twitter.com/HNgUH4XSU3— Ian Parker (@iparkysport) September 8, 2019

“In the first four games we weren’t looking at the others too much,” said the Rangers midfielder, who stands to break Aaron Hughes’ record of 112 outfield caps in the game.

“We were just focusing on ourselves, getting maximum points. We knew that would be difficult and it proved to be difficult, but we managed it.

“We wanted to be in a position in these four games with all to play for. In many ways the pressure’s on Holland and Germany.

“Do I believe we can go and get results against them? 100 per cent yes. Would we beat them if we played them regularly? No.”

Northern Ireland have not beaten Germany since a 1-0 win over the old West Germany in 1983, and have lost their last seven meetings.

Three of those defeats have come under O’Neill, who also picked up on the theme of expectations.

“I think if any team from a country of our size can qualify from a group with Holland and Germany in it then they probably deserve a wee pat on the back,” O’Neill said.

“That’s what we’ll be aiming for. These are two teams that expect to qualify for major tournaments and rightly so because history tells us that’s what they normally do.

“These are in the top eight, 10 teams in Europe. That’s the challenge, so if we can come out of this group at the expense of either Holland or Germany, it will be an amazing achievement for this group of players.”

Germany have undergone an overhaul of their squad since the disappointment of their group stage exit at the 2018 World Cup, a similar change to the one overseen by O’Neill as he has integrated a number of youngsters into his side.

Joachim Low may have a deeper pool of players to choose from, but O’Neill noted that did not make his job any easier.

“I would love to have the resources that Germany have in terms of the players that they have to choose from,” he said.

“But equally what comes with that is massive expectation and the weight of a nation as well. Each job has its challenges.”

Like Northern Ireland, Germany had begun their qualifying campaign strongly, but suffered a serious setback on Friday night when they surrendered an early lead to lose 4-2 to Holland at home.

“It probably wasn’t the game we expected in relation to how Germany played,” O’Neill said.

“They’re going to be disappointed with the result but what we do know is there’ll be a reaction and we have to be ready for that reaction.”

O’Neill admitted he would have rather seen Germany – who have never lost back-to-back European qualifiers – win on Friday night and take control of the group, leaving Northern Ireland to scrap with Holland for second place.

“It would have given us a free hit at Germany and a double-header against Holland,” he said.

“But in many ways it has opened the group up. Essentially we have two double-headers against Germany and Holland and we have to garner as many points as we can.

“Possibly we’re going to need six points from the four games and the best opportunity to get those six points is at home.”