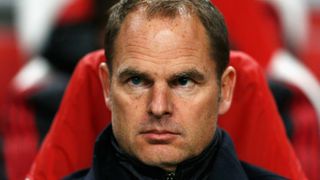 Ajax coach Frank de Boer said he has had no contact from Swansea City over the vacant managerial position at the club, but hinted he would be interested if the right offer came along.

The Dutchman has been heavily linked to the Welsh club since the sacking of Garry Monk in December.

Alan Curtis took over as interim manager and Swansea are taking their time to find the right man for the job.

And De Boer, who has more than a year left on his contract at Ajax, said he could be tempted away from the Eredivisie leaders.

"First you have to see what the plan is at a club and what I and the people I would take with me could add to it," the 45-year-old said.

"The last club I was linked with was Swansea City. I have had no contact with them at this time.

"But what if these people paint me a pretty picture that they are in that category of clubs with which I could do something beautiful? Like clubs such as Tottenham and Liverpool.

"Those are the sort of clubs with which you would want to work. But the most important thing would be the feeling I get."