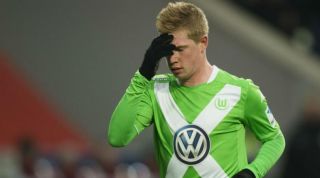 Belgium international De Bruyne has been widely linked with a move away from the club, with German champions Bayern Munich thought to be in pole position to secure his signature.

"For the moment, there are no formal discussions," Patrick De Koster is quoted as saying by The Guardian. "Of course in the next few weeks I will be going around the world to talk about the situation with Kevin but this is just informal information.

"I will talk to everybody but Kevin is very, very happy with Wolfsburg and the way they have treated him since he arrived from Chelsea last year.

"There are still five games to play and hopefully they can make sure of a place in the Champions League next season, so it is a little bit too early to be making any decisions.

"He has a four-year contract at Wolfsburg, so we will have to see what they want to do.

But City are thought to be hopeful of luring De Bruyne to the Etihad Stadium.

"I have met the people from Manchester City and we know each other," he added. "I’ve never spoken to anyone from Manchester United but a lot of other clubs have been in touch to find out some general information.

"I think with the season Kevin has had, if we didn't have these questions then there would be something wrong. I saw [Mino] Raiola's quotes about taking 20 phone calls a day regarding Paul Pogba and it’s the same situation for me and probably for the agent of Memphis Depay at the moment.

"I don't know. Wolfsburg paid €24million to Chelsea so I can see it being a lot more than that."