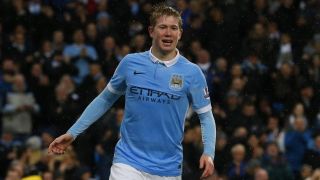 Manchester City star Kevin De Bruyne feels he would have had a better chance of succeeding at Chelsea had the Stamford Bridge side paid big money for him.

The Belgium international joined Chelsea from Genk in January 2012 for a transfer fee in the region of £7 million, but eventually left the club on a permanent basis for Wolfsburg in 2014 after failing to secure regular first-team action.

He quickly became a key figure at the Bundesliga outfit and earned himself a big-money move to City at the start of this season, where he has wasted no time making a name for himself.

De Bruyne feels his £55m pricetag has been beneficial to him rather than a hindrance and thinks things could have panned out differently at Chelsea had he arrived on the back of mega-money transfer.

"It makes a huge difference [whether a club paid a lot of money for you]," De Bruyne told La Derniere Heure.

"I would have played more at Chelsea had they paid as much for me as City did. That's the way things work in this business."

De Bruyne has quickly become an integral part of Manuel Pellegrini's side and is loving life at the Etihad stadium.

"Everything has gone really well for me. It normally takes a bit of time to adapt to your new surroundings, but I immediately got to play a lot due to injuries and that sped things up a bit," the 24-year-old added.

"It's great to play for an attacking team like City. It gives me more space. If I didn't play well at Wolfsburg, the team struggled as well. That's not the case here at City.

"We have a lot of stars, but everyone acts normal. There are no groups within the team, we all get along very well. It's hard to compare this group to that of Chelsea. Maybe we are more united."

The attacking midfielder won the Belgian league title with Genk in 2010-11, but has yet to taste success in the Premier League and he hopes to change that feat in 2015-16.

"The Premier League title is one of our main objectives. Most of my team-mates have already won the league before with City, but not me," De Bruyne said.

"The Champions League is something else. Anything can happen there. The Premier League title is the result of consistent performances."