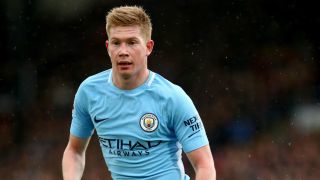 Manchester City's Kevin De Bruyne maintained his record of starting every Premier League game in 2017-18 despite fears over his fitness following a horror challenge from Crystal Palace's Jason Puncheon.

The Belgium playmaker was named in City's XI to host Watford on Tuesday, just three days after being carried from the Selhurst Park pitch on a stretcher having been felled by Puncheon's rash lunge.

De Bruyne was initially taken off with his leg in a brace but was later seen hobbling down the touchline with the support of City's medical staff.

In the aftermath of that 0-0 draw, Pep Guardiola urged the need for referees to protect the players, and the Catalan will have been relieved to be able to select De Bruyne in his side to face the Hornets at the Etihad Stadium - especially after losing Gabriel Jesus to a knee ligament injury at Palace.

David Silva also returned for City - the Spaniard having played just one of the last five games due to personal reasons - while John Stones came back into the starting XI after missing the last 12 matches due to a hamstring injury.