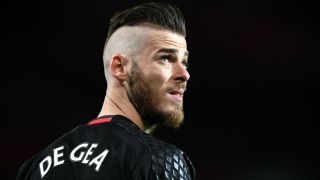 Sergio Romero will keep his place in the Manchester United starting line-up for the Europa League final, manager Jose Mourinho has confirmed.

The Argentina international has started the last 10 matches in the competition, including both legs of the semi-final win over Celta Vigo, keeping six clean sheets in the process.

There had been suggestions Mourinho would restore David de Gea for the showpiece in Stockholm in what is a huge game for United, with a third trophy of the season and a place in the Champions League group stages at stake.

However, Mourinho says Romero will retain his spot and spoke in glowing terms about the good relationship between his top two goalkeepers.

"They are two fantastic goalkeepers. I never saw, in all my career, two goalkeepers be such friends," he said after Thursday's 1-1 draw at Old Trafford, which saw United scrape into the final to face Ajax.

"They support each other all the time. I never saw a bad face, I only saw them support each other. I think it's fair that Sergio plays the final and David accepts that. Especially because he played two Europa League matches, so if we win, he wins the trophy.

"If everything goes normal and there are no problems, Sergio plays the final."

United's preparations for the final have already taken a hit as a result of Eric Bailly's red card in the closing stages against Celta.

The centre-back was dismissed following an altercation with John Guidetti during a fracas in the middle of the pitch, which also earned Facundo Roncaglia a straight red.

Mourinho says there is little point in appealing against the decision and will instead use Bailly in United's last three Premier League matches of the season in order to grant other defenders rest.

"I don't know the incident, I don't want to see it now," he said. "Even if it was unfair, I don't think the rules will allow any chance of appeal. So I don't think he plays the final, so he has to play the remaining matches in the Premier League and give rest to some of the others."