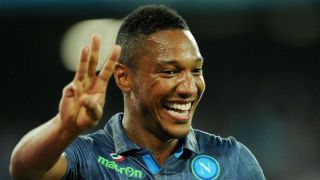 Jonathan de Guzman has swapped Napoli's Serie A title challenge for a relegation battle with Carpi.

Netherlands midfielder De Guzman moved to Stadio San Paolo on a permanent deal ahead of the 2014-15 season, but has yet to make a league appearance for Maurizio Sarri's Serie A leaders this term.

And the 28-year-old has now joined Carpi on loan until the end of the campaign.

With De Guzman signing, Luca Marrone - who spent the first five months of the campaign at Carpi - has moved to rock-bottom Verona on loan from champions Juventus.