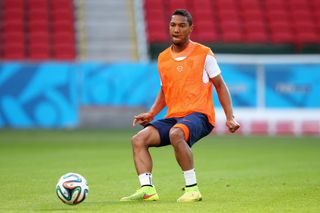 The Netherlands midfielder, who has spent the last two seasons on loan at Swansea City in the Premier League, arrived in Naples from Villarreal last week.

And Canada-born De Guzman says the offer from Napoli would have been difficult to turn down.

"Benitez is a great coach in the game, he has coached great clubs and of course Napoli is no exception," he said. "Certainly his presence here has influenced my decision to choose Napoli, whilst he also knows how to play well.

"With him I can learn so much.

"I thought that this is the right decision. I can learn so much here. Napoli is a great place, and for me this is an honour.

"Napoli are a great club with a great history, here I have the chance to play in the Champions League and I hope to do that.

"Italian football fascinates me, Napoli have been at the top in recent years. I have played in Holland, Spain and England, I wanted a new experience.

"Our targets? We aim to do well in all competitions, whilst the ambition is to play in the Champions League.

"Napoli can finish top of the table, I would like to provide my contribution. I hope to be a part of this team for a long time.

"Now, though, we are thinking of progressing further in the Champions League."

Napoli visit Athletic Bilbao in the second leg of their Champions League play-off on Wednesday after drawing 1-1 at Stadio San Paolo.