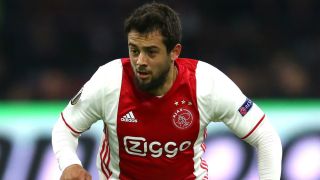 Serie A leaders Napoli were keen to conclude a deal with Ajax in the final days of the January transfer window to bolster their squad in the wide areas.

But unfortunate circumstances apparently led to the transfer being delayed, although De Laurentiis told Gazzetta dello Sport a deal has been agreed for Younes to move to Naples in July upon the expiry of his contract with the Eredivisie side.

"Due to very serious family issues, he chose to postpone his arrival at Napoli. We await him, he'll be one of ours from July, as the contract has already been deposited with the Lega Serie A," he said.

Younes will remain in the Eredivisie for the rest of the season and his agent, Nicola Innocentin, told GianlucaDiMarzio.com a five-year deal has been agreed, after reports had emerged suggesting the player had rejected a switch to Italy.

"After the unfounded rumours circulated in Naples... I want to clarify that the player went to Rome to carry out the medical examinations and to sign the contract for June, because that was the initial agreement to be completed and the five-year contract was obviously signed after medical visits," he stated before Wednesday's deadline.

"The next day in Naples he did more blood tests and went to see the game at San Paolo, waiting for Ajax and Naples to find an agreement to be able to anticipate the transfer."

However, the situation changed with the emergence of personal issues in Germany, which delayed the completion of the transfer.

"In the meantime, however, the boy had family problems that led him to ask the two [clubs] not to go immediately and to postpone the transfer for June," Innocentin added.

"So, I want to clarify that... the immediate departure of Younes [was only prevented by] family reasons. In the last hours it was unreachable because it was simply by air."

Capped five times by Germany, the 24-year-old will hope to force his way into Joachim Low's World Cup squad after making his international debut last year.