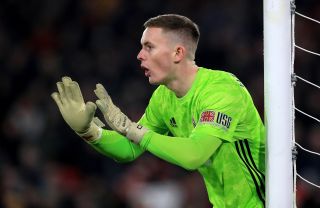 Sheffield United will welcome back Dean Henderson and John Egan for the FA Cup quarter-final against Arsenal.

Goalkeeper Henderson missed Wednesday’s defeat to Manchester United as he was ineligible against his parent club while Egan was serving a one-match ban.

Influential defender Jack O’Connell has missed all three games of the restart with an impact injury but he is improving and Wilder hopes he will be in the squad and Lys Mousset should be fit after coming off at Old Trafford with a knock.

Arsenal welcome David Luiz back from suspension as the most successful club in the competition’s history aim for a 14th FA Cup.

The Gunners will be without Gabriel Martinelli (knee) who has been ruled out for the remainder of the season, while Bernd Leno and Calum Chambers are also sidelined with knee trouble.