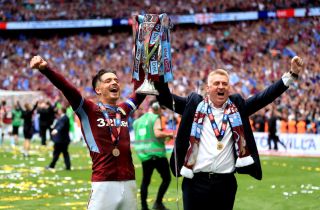 Aston Villa boss Dean Smith has admitted he may not be able to hold on to captain Jack Grealish this summer.

The 24-year-old has shone on Villa’s return to the Premier League this season, and has contributed nine goals and six assists in all competitions.

That has led to speculation he may gain an England call and has also seen him linked with a big-money move to Manchester United.

Smith recognises that victory over Manchester City in Sunday’s Carabao Cup final at Wembley – and with it a place in Europe next season – is unlikely to sway Grealish if his head is turned, and instead believes his future rests on whether Villa stay in the Premier League.

Asked whether victory over City would make it easier to keep Grealish in the summer, Smith replied: “I don’t know. That’s a question we’ll have to answer in the summer.

“Obviously, staying in this league is one of the biggest things to help us keep Jack Grealish.

“He wants to play at the highest level and he wants to win trophies.

“Jack’s future, like the rest of the players, is down to what happens over the next three months. What we can do is assess it then.”