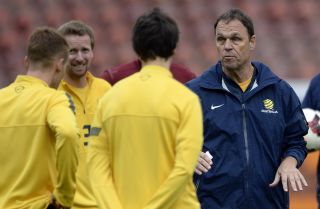 Despite being contracted until the end of next year's World Cup, Osieck's future with the Socceroos has been questioned following the 6-0 loss to Brazil last month.

And there is further speculation another poor showing in Australia's friendly against France in Paris on Friday could see the former West Germany assistant manager sacked.

Dutchman Guus Hiddink, who led Australia at the World Cup finals in 2006, would be the frontrunner to take over should Osieck be dumped while reports on Friday suggest former France and Liverpool coach Gerard Houllier also looms as an option.

But Osieck has not heard any rumblings from Football Federation Australia and presumes his job is safe for the long term.

''Nobody has spoken to me and if they (FFA) have ideas like that it would probably be just a matter of fairness at least to have a conversation with me,'' a defiant Osieck said.

''But nothing has happened. Therefore I don't pay any attention to the speculation. I don't need distractions.''

Osieck has guided Australia to their third successive World Cup and said the backlash since the hiding against Brazil was unwarranted.

He said he was 'carrying the consequences' of the unsuitable timing of the Brazil match, when many of the Socceroos players were out of season.

"We are in the phase of preparing (for the World Cup) and I really picked the best teams in the world to get an idea. Do you think you can go to Brazil and beat them on their own soil by a big margin?" Osieck said.

"Tomorrow (Friday) we play another top team, do you expect to hammer them 5-0? It's a little bit out of order.

''People have to understand if we don't face the big challenges right now we wouldn't be prepared for the World Cup."