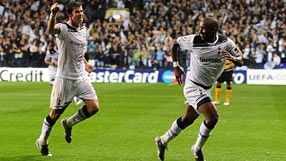 No one needs to tell Tottenham fans how remarkable this season is for the club, who are in the prestigious Champions League for the first time in 50 long-awaited years.

Merely qualifying for the competition at the expense of moneybags Manchester City could be seen as an accomplishment.

However, Spurs have risen to the challenge, beating the holders Inter Milan last time out with Bale assisting two goals in his man of the match display, having scored a hat-trick in the first fixture with the Italians at the San Siro.

The winger has since been linked with a number of high-profile moves to Europe's top clubs, but Defoe believes he would be better off staying put.

"It's always good to hear big clubs abroad saying nice things about you and Gareth deserves all the praise he is getting," Defoe said in The Mirror.

"But just look at how long it took for him to adapt to moving between clubs here in England. He moved to Spurs from Southampton three years ago. It's not as easy as people may think.

"To do it abroad must be even harder. In any case, I remember the manager saying earlier this season that we are probably two players away from winning the Premier League.

"I'd agree, which is why I don't see my own future anywhere else but at Spurs. Tottenham are not a selling club. We are a coming force and big clubs keep their best players."

The former West Ham and Portsmouth striker also rubbished reports that the praise Bale has received may be too rewarding.

Defoe believes that his Tottenham team-mate deserves the recognition for doing his job, and doing it fabulously well.

"I don't think you can go overboard about him. What he is producing is there for everyone to see," he said.

"It's like having an in-form forward who is scoring goals on a regular basis. Nobody can accuse people of going overboard about you because you are doing the business. You are performing.

"Gareth is doing it at the highest level of club football. To go to the San Siro and get a hat-trick against the kings of European football?

"He is the ideal wingman because when he gets down there and you are waiting in the box, you know he is going to find you."