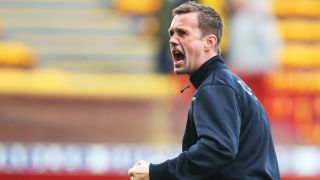 Celtic manager Ronny Deila hit out at Kris Commons following his disgruntled reaction to being substituted in the 3-1 Europa League loss at the hands of Molde on Thursday.

Commons, who had earlier made it 2-1, was left fuming after Deila opted to replace him with Nadir Ciftci in the 76th minute of the Group A encounter in Norway and exchanged words with members of the club's coaching staff.

But the Celtic boss has blasted the former Scotland international, as he said: "We are a team. I understand that players can be disappointed, but to show it in that way is now how we want.

"We are one team and we are not one player."

Thursday's defeat saw Celtic drop to bottom in their group after three games and Deila admitted that his side were simply not good enough, although he has not given up hope of reaching the knockout stages just yet.

He said: "We performed not at the level we should do. We started okay, then they scored and we got stressed.

"There were not enough crosses and they won the ball in good situations and counter-attacked us. Everything was too slow. I expected much better and I'm very disappointed, of course.

"It makes it much harder but we have two home games now and need to beat Molde at home. There is still a chance but we need to win against Molde and Ajax at home."