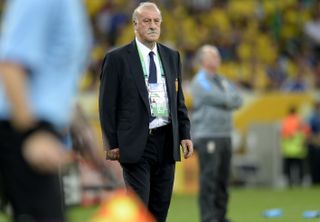 Despite being without a host of their stars, the world and European champions still got the job done with goals from Alvaro Negredo and Santi Cazorla enough for victory in Guayaquil.

Del Bosque was happy his side dealt with the difficulty of playing at altitude and with the likes of Xavi, Juan Mata, Fernando Torres and Gerard Pique all absent.

"We are very confident.

"The most important thing is to keep the competitive spirit, all young and old, keep that style."

Spain dominated early on an went in front when Negredo produced an audacious back-heel to flick in Cazorla's cut-back on 25 minutes.

The Arsenal midfielder then completed the scoring after the break, finishing off clever lead-up play from Cristian Tello.

Despite the apparent ease of the scoreline, Del Bosque said Ecuador made his side earn the win.

"We go 90 minutes into the game without injury, which is good.

"As we predicted, Ecuador was strong in the air. They have good players."

Spain are currently unbeaten in their World Cup qualifying group but are just one point ahead of second-placed France after five matches.

They travel to Finland in their next qualifier on September 6 in a clash which is crucial to their chances of winning automatic qualification to next year's tournament in Brazil.