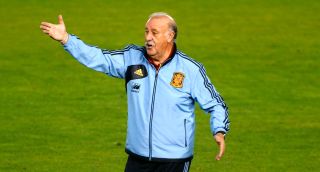 Del Bosque's men sit top of UEFA Group I, three points ahead of second-placed France, and will clinch their place at next year's finals in Brazil with a draw against Georgia on Tuesday.

The world and European champions have not lost during qualifying - indeed, Spain are unbeaten in World Cup qualifiers since March 1993 - but have been held to home draws by France and Finland.

Spain were made to work hard for their 2-1 win over Belarus last Friday, and Del Bosque accepted that it has been a challenging campaign.

"We have had four bad, uncomfortable games, but of those, France and Belarus played well," he said.

"We are an attacking team but the stats show that we don't concede many goals and we defend well."

However, the 62-year-old is expecting more attacking contests at the World Cup.

"There have been teams who have been on the back foot against us but I don't think that will happen at the World Cup, there will be more open games," he added.

Del Bosque left Real Madrid's Iker Casillas out of the victory against Belarus in favour of Barcelona's Victor Valdes.

And the former Real boss revealed that he is not sure who will start in goal, with Napoli's Pepe Reina also vying for a place in the side.

"We'll surely make some changes and one of them could be in goal," Del Bosque explained.

"We have three fantastic goalkeepers and any one of them can play. It's not a problem to decide between them. If there's a problem, it's the number of options we have."