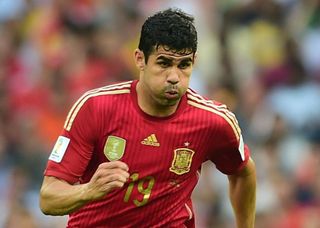 Costa has been superb in front of goal for Chelsea since joining from Atletico Madrid in July, netting nine times in seven Premier League appearances, but has yet to register for Spain since turning his back on homeland Brazil to represent the Iberian nation, for whom he made his debut in March.

The 26-year-old was disappointing as Spain flopped at the World Cup in Brazil, failing to make it out of the group stages, and Del Bosque is eager for Costa to make an impact ahead of Euro 2016 Group C qualifiers against Slovakia and Luxembourg.

"Diego has in front of him the challenge to show everyone that we have taken the right decision," Del Bosque told Marca.

"Maybe we are wrong, and it does happen in football, but I have a lot of confidence in him that he is going to do very well.

"I think that he can be very important for us as I believe in his qualities. He has put his faith in us and we have put ours in him.

"If I had seen anything that made me doubt him then I would say it."