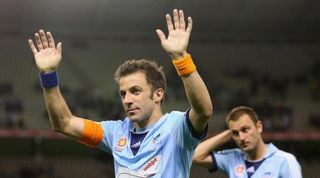 Del Piero will also serve as a brand ambassador for the ISL, which is set to run from October 12 to December 20.

Del Piero tweeted: "I'm pleased to announce that as of today I am a @DelhiDynamos player and ambassador of the new @IndSuperLeague"

He became a club legend during a decorated 19-year spell with Juventus and played 91 times for his country.