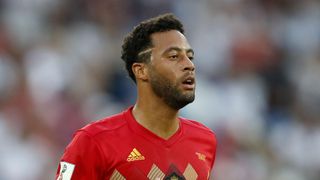 Mousa Dembele has replaced the suspended Thomas Meunier in Belgium's line-up to face France after Roberto Martinez sprung a selection surprise for the World Cup semi-final in St Petersburg.

Tottenham midfielder Dembele was an unused substitute in both of Belgium's previous knockout stage matches but comes in for Paris Saint-Germain wing-back Meunier.

What that means in terms of Belgium's formation is unclear, with the team's official Twitter account listing Dembele – who operates centrally by trade – on the right of a midfield four.

Another option could be deploying Kevin De Bruyne, who operated at false nine and scored in a man-of-the-match display against Brazil last time out, on the right-hand side.

France make their expected alteration to the side that beat Uruguay 2-0, with Blaise Matuidi back in for Corentin Tolisso after a suspension of his own.

Kylian Mbappe starts in attack despite missing training on Monday, as do right-back Benjamin Pavard and midfielder N'Golo Kante after only playing a minimal part in that session.