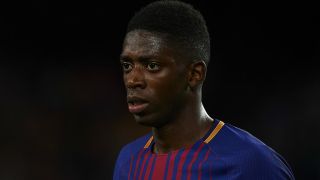 Ousmane Dembele has travelled to Finland to undergo surgery on his hamstring, Barcelona have confirmed.

The France international tore part of a tendon in his left thigh during the 2-1 LaLiga victory at Getafe on Saturday.

Barca announced the following day that Dembele would require an operation and will be out of action for up to fourth months.

"Ousmane Dembele traveled on Monday morning to Helsinki, Finland, where he will undergo surgery to repair a rupture of the biceps femoris tendon in his left thigh," the club said in a statement.

"Dembele will be operated on Tuesday by Dr. Sakari Orava. Following the surgery, the club will provide a medical statement."

The 20-year-old joined from Borussia Dortmund for a club-record initial fee of €105million in August.

He has made only three appearances for the club this season.

will be operated on in Finland on Tuesday and begin his recuperation.    September 18, 2017