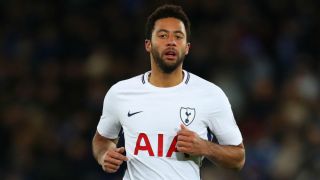 Les Ferdinand is disappointed with how Mousa Dembele's career at Tottenham has progressed, having believed he would be the next Spurs player to follow in Gareth Bale's footsteps and join Real Madrid.

Midfielder Dembele arrived from Fulham in 2012 but has seen his career in north London hampered by injuries.

The Belgium international underwent ankle surgery in May but injured it again in an EFL Cup tie with Barnsley in September, keeping him on the sidelines for over a month.

However, he was excellent as Tottenham fought back from two goals down against Juventus to draw 2-2 in their Champions League last-16 first-leg clash on Tuesday.

But such performances have been all too rare for the liking of former Spurs striker Ferdinand.

He told Omnisport: "I'll be honest; I've been disappointed with Mousa. I really thought he would go on and be next player to leave Spurs and join Real Madrid.

"He's got that ability. He's suffered a few injuries, but hasn't hit the heights that I thought he was going to hit.

"He has done really well and when he plays you can see how important he is to Spurs, but I expected him to push on from when I left [when Mauricio Pochettino arrived in 2014].

"I really thought he'd be the next one to do a Gareth Bale [and join Real Madrid]. Instead, Harry [Kane] has come and overtaken him in the limelight."