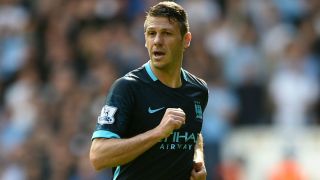 Manchester City defender Martin Demichelis admitted he was all but set for a River Plate comeback until the move fell through.

Demichelis signed a one-year contract extension with City during the off-season but that was before the 35-year-old seriously considered returning to River, where he emerged from the youth ranks in 2000.

The veteran Argentina international, who will partner countryman Nicolas Otamendi in the absence of injured centre-back Eliaquim Mangala, said his bags were packed for his homeland, however, coach Marcelo Gallardo decided against the move.

"Some things happened to me in Man City, so I had this dream about moving back to River for this season," he said via the Manchester Evening News.

"It's the club where I started to play. But I have to respect the coach Marcelo Gallardo, who decided to keep playing with his players and didn't hire me.

"I truly wanted to play for River, you know.

"I even talked with River's general manager Enzo Francescoli and told him that I wanted to move back to River for this season.

"I texted him and told him that I wanted to play for them. It can be even said that I had my luggage packed and ready to move back to River."