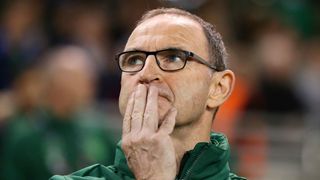 Denmark and Republic of Ireland contrived to play out another dismal goalless draw in a Nations League dead rubber on Monday.

With Age Hareide's men already assured of progression to League A and Ireland condemned to League C, two usually conservative sides were especially unimaginative in Aarhus.

The teams had served up a drab stalemate in Ireland when points and places were on the line earlier in the campaign, so it perhaps came as no surprise that there was little to thrill here.

Ireland barely threatened to end a scoreless run that now spans four matches, while Nicolai Jorgensen squandered a huge chance to break the deadlock at the other end.

played 45 minutes for Denmark this evening as they drew with Ireland to finish unbeaten in their UEFA Nations League group.  November 19, 2018

The two defences dominated from the off, with Mathias Jorgensen's timely challenge intervening when a loose ball did threaten to run for Seamus Coleman in front of goal.

Darren Randolph was belatedly tested at the other end when he turned away a teasing cross-cum-shot from Peter Ankersen, before Nicolai Jorgensen failed to turn the rebound goalwards.

Christian Eriksen's half-time withdrawal unsurprisingly did little to improve matters and Yussuf Poulsen somehow lashed over from close range shortly after the restart.

Then came Nicolai Jorgensen's big moment as the forward stole possession from Richard Keogh but shot against the post with the goal at his mercy, capping a dreary evening for both outfits.

What does it mean? O'Neill's methods ineffective

Ireland have become a turgid side to watch, their cautious tactics contributing to consistently low-scoring matches. And while this set-up almost got them to the World Cup, the Nations League has been a tough experience. The plan does not seem to be working any more.

There was little opportunity - or, indeed, motivation - for Eriksen to impress, but he still looked a class apart in the first 45 minutes. In League A, where opponents will attack Denmark, the Tottenham star might have more space and thus more joy.

46: Second half underway. One change at the break for Denmark as Christian Eriksen is replaced by Jens Stryger Larsen. Ireland remain unchanged. (0-0) November 19, 2018

The reverse fixture saw Ireland experiment with full-back Cyrus Christie in the middle of midfield and he reprised that role here. On both occasions, the Fulham man has looked ill-suited to the position and completely out of his depth, yet Martin O'Neill persists with the tactic.

Euro 2020 qualification gets under way next year, with Denmark already assured of at least a play-off place. Ireland have much more work to do if they are to reach the finals.