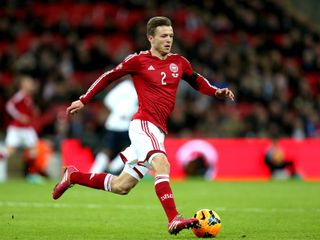 The 27-year-old has agreed a two-year contract to move to Scotland once his time at Silkeborg ends in late June.

The former Aarhus player has eight international caps and spent two seasons with Leeds but only made 14 appearances under six managers before returning to his homeland in 2016.

Manager Stephen Robinson told Motherwell’s website: “Casper has undoubted technical ability and arrives at the club with an impressive CV.

“He was at one point considered one of the real emerging talents in Danish football, but perhaps will have been frustrated with how his career has gone over the last few years.

“We want to give him the platform and help him recapture his best form. Motherwell is a club which prides itself on getting people back on the right path, and that’s very much our aim with Casper.

“He has been over to train with us and impressed us not only with his ability on the park, but his desire, his hunger to be here and with a bit of a point to prove.

”We are continuing to work on transfer targets. Our priorities now lie in bringing in forwards.”

Frear held talks over extending his stay but is on a list of eight first-team players who are departing having either not been offered contracts or telling the club they intend to leave after May 31.

Also on the list are George Newell, Jake Hastie, whose move to Rangers was confirmed even earlier, Christian Mbulu and Aaron Taylor-Sinclair, whose January loan move to Crewe spelled the end of his Fir Park career.

Chris Cadden has been offered a new deal but is yet to sign. The 22-year-old would command training compensation and is understood to be weighing up a new two-year contract.

Motherwell were keen to keep Aldred but the defender is moving abroad after his Bury deal expires in the summer. Robinson is hoping to re-sign winger Ariyibi, who has a year left at Nottingham Forest.

Craig Tanner has been offered a short-term deal to help him regain fitness after missing the entire season following knee tendon damage.

Another player with first-team experience, Shea Gordon, is among seven reserve players leaving.