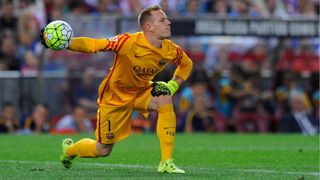 Barcelona goalkeeper Marc-Andre ter Stegen will miss a week of training as a result of planned dental surgery.

The 23-year-old was left out of the Germany squad for friendlies against France and the Netherlands and was expected to work with the other Barca who have not been called up by their national teams.

Ter Stegen will sit out Barca's practice sessions for the remainder of this week, though the club are confident he will be fit to be included in the matchday squad for the Clasico showdown with Real Madrid at Estadio Santiago Bernabeu on November 21.

"Luis Enrique will be without Marc-Andre Ter Stegen in training this week as the German keeper will undergo dental surgery, a procedure that had been planned in advance," read a club statement released on Monday.

"Nevertheless, the player is expected to be back in training from the start of next week, after the international break, to prepare for the Clasico against Real Madrid."

Ter Stegen has made 10 appearances in all competitions so far this season for the European champions, but some of his performances have prompted criticism and he has lost the starting spot in the league to Claudio Bravo since the Chilean's return to full fitness.