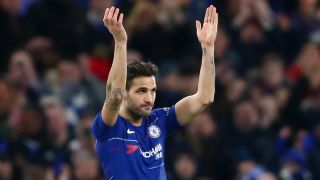 Cesc Fabregas looks to have played in the Premier League for the final time after leaving Chelsea for Ligue 1 strugglers Monaco.

The Spain international joined Arsenal in 2003 and spent eight years with the north London club, becoming captain under Arsene Wenger before departing for boyhood side Barcelona.

Fabregas was back in England with Chelsea in 2014 and finally got his hands on a Premier League title in his debut season at Stamford Bridge, winning another two years later.

With the 31-year-old seemingly unlikely to be seen on English shores again, we take a look at the numbers behind his time in the Premier League.

104 - A sizeable chunk of Fabregas' Premier League appearances came as a teenager. Only Wayne Rooney (105) made more before his 20th birthday.

50 - Fabregas' half-century of goals has him joint-fourth for Spanish players in the Premier League. Fernando Torres (85), David Silva (54) and Diego Costa (52) have more than Fabregas and Juan Mata.

4 - Fabregas is the fourth youngest goalscorer in Premier League history. His maiden strike against Blackburn Rovers in August 2004 came at the age of 17. James Vaughan, James Milner and Rooney (all 16) have hit the net at a younger age.

15 - Fabregas' career-best Premier League season for goals came in 2009-10. As well as hitting the net 15 times, he provided 13 assists in a campaign that ended with a World Cup triumph in South Africa.

111 - The number of assists the Spaniard has tallied in the Premier League. Only Ryan Giggs (162) has managed more.