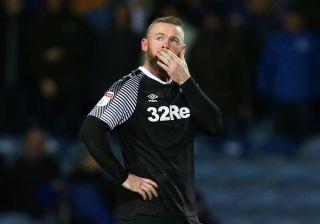 Derby manager Phillip Cocu was left to rue a costly mistake by Wayne Rooney following his side’s 2-1 defeat at QPR.

Martyn Waghorn had equalised for the Rams after Grant Hall opened the scoring against the run of play.

The result continued Derby’s poor away form – only strugglers Luton and Barnsley have picked up fewer points on the road this season.

“For the second goal we didn’t defend well – didn’t make the right choice. The opponent didn’t create a lot of chances but they were effective,” said Cocu.

“We maybe created more, but they scored more. The way we played was not bad. But football is always about results, so we cannot be happy.

“We came back after their goal and in the second half I think we played better until we lost possession by a cross-pass of Wayne.

“It’s frustrating. Away from home since the start of January we have been playing much better, dominating more and creating more, but the only issue is that we concede too many goals.

“We had a feeling that if we kept it at 1-1 we were in a good position. That’s what we felt at half-time. We’re frustrated that again it’s a defeat.

“We were able to create, so that’s not the reason we didn’t get the result.”

QPR boss Mark Warburton praised his team but admitted they rode their luck.

The hosts survived late Derby pressure, with keeper Liam Kelly producing a fine save to deny Waghorn, who then missed a chance to equalise.

Warburton said: “We’ve had games this season where we haven’t got the rewards – and tonight I thought we rode our luck a bit in the final five or 10 minutes.

“We deserved that bit of luck – and we did ride our luck – and that’s a vital three points for us.

“We dropped too deep and also conceded a soft goal. It meant that after being dominant we ended up going in 1-1 at half-time.

“But all credit to the players. Their heads weren’t down and they responded. We stepped up the tempo and I felt we deserved to win.

“Derby are a very good team with a lot of quality and they are going to cause you problems.

“But we felt that our attacking prowess could hurt them as well and that proved to be the case.”

Ebere Eze set up the winner by intercepting Rooney’s attempted cross-field ball and then finding Chair, who finished coolly.

“It was a great finish by Ilias. We wanted him to come on and add energy. Ilias came on, got on the ball and was brave,” Warburton said.