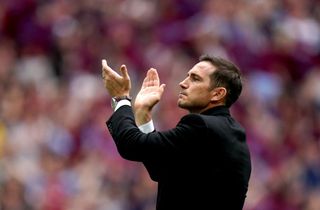 Frank Lampard will hold crunch talks with Derby owner Mel Morris this week after dismissing the constant speculation linking him with Chelsea as “irrelevant”.

Lampard’s impressive first season in management ended ultimately in disappointment after the Rams were beaten 2-1 by Aston Villa in the Championship play-off final at Wembley.

Yet his strong showing on his managerial debut has made Lampard a leading contender to take over at former club Chelsea should Maurizio Sarri leave this summer.

Frank Lampard has arrived for his post-match press conference.— Derby County (@dcfcofficial) May 27, 2019

However, Lampard insisted: “I spoke to Mel three days before this game and we said we’ll sit down and talk, and that any talk around that is irrelevant.

“I have to say after my first year and the opportunity that this club gave me, it’s massively important that everyone understands that’s my overriding feeling. That’s where I am.

“The squad will break up a bit, naturally. The loans go, whether we can get any of them back remains to be seen and a lot of players are out of contract so there’s a lot of work to be done.”

Villa made it to the Premier League after three seasons away as goals from Anwar El Ghazi and John McGinn helped secure a 2-1 Wembley win.

Derby sub Jack Marriott pulled one back but Villa held out as boss Dean Smith led the side he supported as a boy back to the top flight.

The former Walsall and Brentford chief said: “Reality has just set in. It all feels a little bit surreal but it’s no more than those lads deserve and no more than this football club deserves.

“The potential of the club is massive. It feels right. I believe this is a Premier League club. That’s not me speaking with a supporter’s head on. History tells you that.

“We’ve fallen on hard times. Last season was tough for everyone who went through the defeat here to Fulham.

“The players and the owners deserve what we are going to get.”