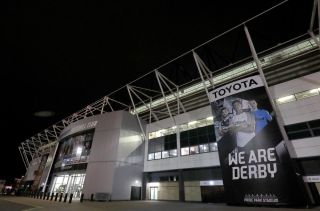 Derby have claimed the English Football League’s charges against them for breaching Financial Fair Play rules are “unlawful”.

The Sky Bet Championship club were charged on Thursday for recording losses in excess of the permitted amounts for the three-year period ending June 30, 2018.

Central to the EFL’s charges is Derby’s £80million sale of their Pride Park stadium to owner Mel Morris before the club leased it back.

“The club will strongly contest the challenge to the valuation of Pride Park stadium, as well as the newly notified charge in respect of intangible fixed asset amortisation.

“As a matter of law, the EFL is not entitled to bring either of the charges, having previously agreed to all of the arrangements surrounding the stadium sale and never having raised the issue of player amortisation before. The club shall argue that the very bringing of the charges itself is unlawful.

“At all times, the club has acted transparently with the EFL in its submissions for both FFP/P&S and, in respect of the charges above, had received written approval for all of its submissions in respect of this legislation. No allegation has been raised to the contrary by the EFL. Rather, the EFL now claims that it made a ‘mistake’.”

Derby said the stadium was valued by professional valuers and that both the transaction and valuation were discussed “extensively with the EFL executive”.

The club claimed the EFL’s request for “a relatively modest price adjustment” was accepted and the valuation report was prepared by “a highly reputable and professional and independent firm”.

Derby’s statement added: “The club discussed the rationale for the stadium sale with the EFL executive, ahead of the transaction, supplied and discussed the valuation, and bar a small adjustment in respect of its FFP/P&S submissions, the club was given written approval.”

Derby reported combined pre-tax losses of just over £8m for the period in question, having posted a profit of £14.6m in their latest accounts. But those figures were boosted by the £80m sale of their stadium, which attracted criticism from fellow Championship clubs.

Derby are the second Championship club to be charged this season under FFP rules over the sale of their ground after after similar allegations were levelled against Sheffield Wednesday by the EFL.