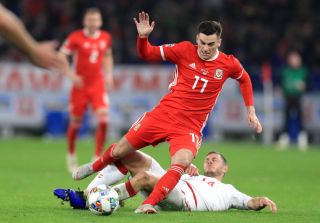 Tom Lawrence has been named in the Wales squad for their Euro 2020 qualifiers against Slovakia and Croatia, just over a week after he was charged with drink-driving.

The Derby forward was charged on September 24 after a crash involving his Range Rover Sport.

The incident followed a club-sanctioned “bonding” session, whereafter Derby said a small group had stayed and continued at the bar.

Lawrence is due to appear at Southern Derbyshire Magistrates’ Court on October 15 – two days after the Croatia game – with team-mate Mason Bennett in relation to the incident.

The 25-year-old missed Derby’s 3-2 home victory over Birmingham on Saturday, but he started the Rams’ 2-2 draw at Barnsley on Wednesday night.

Wales manager Ryan Giggs is due to address the selection of Lawrence at a Barry press conference on Thursday morning.

Skipper Ashley Williams returns to the squad after being left out of the Azerbaijan qualifier and friendly win against Belarus last month.

Williams, 35, started the season without a club but he joined Bristol City at the end of August and has played the last four games in the Sky Bet Championship for the Robins.

Juventus midfielder Aaron Ramsey also returns after finally shaking off the hamstring injury which plagued him at the end of his time at Arsenal.

Ramsey has yet to feature in the Euro 2020 qualifying campaign, which sees Wales trail Group E leaders Croatia by four points, albeit Ryan Giggs’ side do have a game in hand.